The popularity of the Taiwanese author Chen Maoping (陳懋平), who wrote under the pseudonym Sanmao (三毛) has proved perennial. Her tragically early death in 1991 at her own hands, still not even fifty, added to the appeal of the mythos of her life and character that has lasted up to the present in the Chinese speaking world. It shows no signs of abating. Her works were easily available in the state-run bookshop in Hohhot, Inner Mongolia, when I lived there in the mid 1990s. They can be found not only throughout the People’s Republic, but across Hong Kong, and in Taiwan. I can seriously say I have never met anyone who had a negative view of her works. Along with the singer Deng Lijun (Teresa Teng, 鄧麗君) and Pai Hsien-yung’s (白先勇) (author of`Taipei People’), she remains one of the great figures in Taiwanese cultural prowess and power in the last half a century.

Of her works, `Stories of the Sahara’ (撒哈拉的故事) is amongst the most popular. Written after a stay in El Aaiun,  a part of the Sahara desert then under Spanish control in the 1970s, this collection of shorter pieces has never before been fully translated into English. Mike Fu’s accessible, and fluent, rendition just published by Bloomsbury ( https://www.bloomsbury.com/au/stories-of-the-sahara-9781408881880/) rectifies this.

Sanmao’s persona was that of a free spirit. She was evidently also a very troubled one. Her life pushed her to Europe, Latin America, and then back to Taiwan, where she spent her last years. Restlessness, a sense of inquisitiveness, an open-mindedness, and a lack of cultural encumbrances which meant she could experience the world around her without losing a sense of who she was and what her values were are clearly displayed in this translation. Her style in the original Chinese is direct, and accessible. This English version duplicates that. Whatever she writes about, her subject, and her interests are clear, and engaging.

Sanmao lived in the Sahara with her Spanish husband. His death in a diving accident in 1979 was a catastrophe she never recovered from. He figures in these tales as an uncomplicated presence – someone who did not speak foreign languages, was happy to go through life in the same simple, unadorned way as her, and is appreciated for his stability and loyalty. Sanmao herself records her response to the expected, and unexpected, challenges of living in such a remote and different environment to the one she had been born and brought up in. Her tone is the key: open minded, but also critical, amazed but not overwhelmed, and made human by the fact that so much of what she was and experienced in the society she found herself in was amusing and comprehensible to her. Her humour and humanity clearly maker her a global citizen – something that, alas, is less and less appreciated in our more anxious, partisan and parochial times.

She is a very gifted raconteur. Her account of her husband’s being stranded in quicksand while on a trip to search for fossils. and her desperate effort to save him despite an attempt by passers-by to abduct and possible rape her, is gripping – and even manages to end with a not of defiant humour, saying that the couple planned to go on the same kind of expedition the week after. Another tale mentions her wearing a necklace she had found on the street and being afflicted by increasingly serious illnesses until a local faith healer tells her the jewellery is cursed. Along the way, she tells of how she managed to get a local driving licence, how she battled with locals over gaining supply of food, how she and her husband formally married (in the lowest key way possible) and finally, how they had to leave their home for good because of the increasing instability.

Even in English, Sanmao’s energy and quirkiness come through. She often describes herself as `cackling’ at events, particularly those involving her husband and his battles with their environment. She mentions her disdain for flashy clothes and any form of make up. Her ability to relate to, engage with and understand the environment she is in through admitting what she did not understand is admirable. She may be a teller of tales, but she gives these tales authenticity by resisting easy endings and resolutions. One episode tells of her deep compassion for a local slave that they had found was working on improvements to the property they were renting. Another mentions the attempted rape and execution of the beautiful wife of a local rebel leader. In neither case was the end of the episode a particularly happy one – the slave got sold to another owner, and the wife was shot dead. But in both cases, there were at least some tiny mitigating mercies. The slave was able to hand money she had given him to his family before being taken away. The wife was shot dead by a fellow rebel intervening, before the vile agony of rape and public humiliation. These betray the messiness of real life, rather than the tidying up intervention of a story teller focussed on the story telling than the story itself.

This is powerful and intense material. It is great that this translation makes the work of such a popular and important modern Chinese language literary figure available to English readers. Sanmao fascinated and intrigued generations of readers in the Chinese speaking world. It will be fascinating to see what kind of following familiarity with her work might gain her elsewhere. Even in a wholly different language, and in a different era, her character and the way in which that is reflected through her writing style, is striking.  She deserves to be a global figure. Hopefully this will be part of a successful posthumous application process. 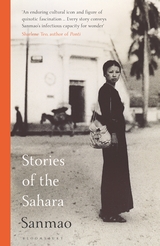